The game’s history can be traced back to 1530, to an Italian lottery which is still played every Saturday in Italy. From Italy, the game was introduced to France in the late 1770s. The Germans also played a version of the game in the 1800s, but they used it as a child’s game to help students learn math, spelling and history.

When the game reached North America in 1929, it became known as “beano”. It was a country fair game where a dealer would select numbered discs from a cigar box and players would mark their cards with beans. They yelled “beano” if they won.

New York toy salesman Edwin S. Lowe renamed it “BINGO” after he overheard someone accidentally yell “bingo” instead of “beano”. He hired a Columbia University math professor, Carl Leffler, to help him increase the number of combinations in bingo cards. By 1930, Leffler had invented 6,000 different bingo cards.

A Catholic priest from Pennsylvania approached Lowe about using bingo as a means of raising church funds. When bingo started being played in churches it became increasingly popular. By 1934, an estimated 10,000 bingo games were played weekly, and today more than $90 million dollars are spent on bingo each week in North America alone.

In 2008 the Chapter had 100 members.  Bingo was organized by the Fundraising Committee with Chairman: Mary Ellen Oliveira, Co-Chair: Betty Johns

Snacks were served and the Bingo Hopper was rented.  There were No Silent Auction or Raffle Baskets.  100 players attended and one Senior Living Residence brought a busload of players.  There were two Matinee sessions held at Placer Board of Realtors Center in Rocklin.  The event netted $2367.  It was recommended to have 1 day and 1-night session and to serve lunch/dinner at future Bingo fundraisers.

In 2009 Linda Arlen started as Bingo Chair and Bingo was moved to the Blue Goose Event Center in Loomis.  Bingo has been held at the Blue Goose ever since that time.  A western theme was established and the name “Bingo Roundup” was given to the event.   Karen Funk designed the flyer for Bingo that is still used today.  We started having two sessions:   2-4:30 and  5:30 – 8.  Approximately 300 people came to play.

Linda Arlen continued as Bingo Chair with Debbie Young as her Co-Chair.  In 2010 we started to have a Program with Donors, listed. 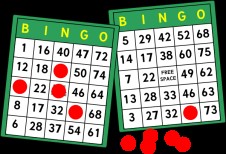 This was my 1st experience with AL of Greater Placer’s Bingo and I had fun – I WON!!! So you know I was hooked.  I was impressed with the involvement of so many members helping with the event.

In 2015 I decided to take on the Bingo fundraiser as its Chair.  I was so happy that those members who have worked on this fundraiser were willing to continue on in their positions.  That made my job easier.   Our attendance was 398 with 220 tickets sold for the Afternoon Session and 178 tickets sold for the Evening Session.  The net profit was $20,308.  This was the first time that Social Media was used to advertise the fundraiser, and tickets could be purchased online at Eventbrite as well as from the Thrift Shop and members.

Bingo is a fun way to get together with neighbors and friends.  It has consistently been a great fundraiser for our chapter and provides funds to help the less fortunate in our county through our Philanthropic Programs.

We look forward to seeing all of you on April 13th at the Blue Goose Event Center in Loomis.  Bring your daubers and your bandanas to the Bingo Roundup and have a rip-roaring good time!  To purchase on-line tickets click here.