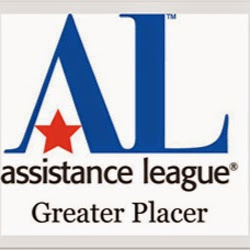 Who doesn’t remember a favorite stuffed (now called “Plush”) animal that was your favorite friend in childhood?  Mine was a cuddly rabbit that I carried everywhere in my youth.  He was my companion and we experienced life together.  As the years passed and I moved into adulthood, my son’s Snoopy Dog stuffed animal became a treasured member of our family.  And now as I enter “seniorhood”, Assistance League of Greater Placer has afforded me the opportunity to again embrace a lovable plush animal-AL BEAR. 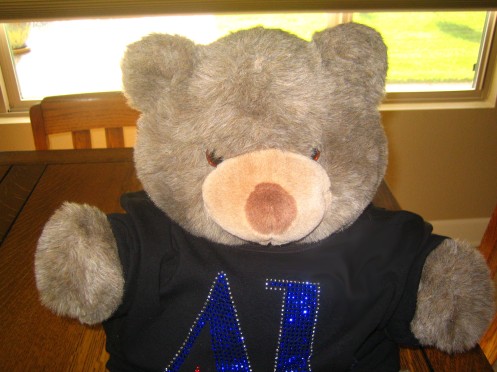 AL BEAR is more than just a stuffed animal.  He is a symbol of the dedicated and hard-working volunteers in our Assistance League chapter. Since 2004, the AL Bear Award has been presented every monthly meeting to a member who contributes her time and energies, oftentimes in the background.  The recognition is special because this award is given to a chosen member by the previous month’s recipient…member to member.  AL cannot be presented to a Board member or a previous recipient.

You can imagine that since 2004, many of our members have been honored to take AL BEAR home for the month and enjoy his companionship.  He has survived many interactions and adventures with families, pets, grandchildren, entertainment, and trips.  Each month’s AL Bear Presentation is a time to showcase our members.  In my 20 years with Assistance League of Greater Placer, many things have changed as needs have grown, but what remains constant is the caring and committed people who work hard to help Placer County communities.

AL BEAR and I got an early start this morning because he was so excited thinking about whom he has selected for the next AL Bear Award recipient and his new pal for the month of March.  I might add, he could BEARLY contain himself during this meeting; keeping a secret is very hard for AL, but then actually seeing his new pal was almost UNBEARABLE.

After some time spent together, AL had to straighten me out.  He was quite concerned I did not understand the meaning of some familiar BEAR mottos.

Does a BEAR take a ‘walk’ in the woods?… does not include an archery range.  I shoot on a weekly league and after 2 visits he let me know he was scared of arrows; well, I should have thought that one out for myself. During that conversation, he also asked me if I ever wondered where the term BEAR *** NAKED came from?   Well, it seems BEARS don’t really like to wear clothes, so we have agreed on BEAR ESSENTIALS, just camouflage scarf attire on shoot day which is now his archer’s souvenir.  You can only imagine how much he hates hearing me use the word ‘shoot’!

It was good he was able to BEAR his soul early on so we got right down to the BEAR facts; although we are together to have some fun, AL reminded me of our responsibilities of looking at the qualities of our Assistance League members to select the next AL BEAR recipient. I could BEARLY keep up with all the wonderful things he had to say about all the volunteers he has spent time with and what he really liked about each of them.  AL knew I needed help as I am a fairly new member and he has all the history I needed.

AL said, “Think about the quiet type; sometimes you don’t see her, but you know she’s been there.”  The annex is always clean and ready for the next meeting – – – we know it is not always left that way.  Who is she?

AL is partial to our Assistance League kids programs – – – he relates; they’re his size.  Even though he doesn’t like clothes he knows kids do and he likes a person that helps dress them.  We have a mom and grandmother amongst us that spends time with other children at Operation School Bell® shopping, putting together school supplies, and preparing donations for the Kids Korner at our Thrift Shop.   Who is she?

AL said, “Think about the type that is always willing to help.”

When we have our Assistance League tea, raffles, bingo, and concert, there is a member that not only is willing to volunteer herself but seems to get her husband involved with our fundraisers, too. Who is she?

Now we all know that when it comes to money, you must balance to the penny, so you would want a detailed person to be the keeper of the coffers, and that might fill the position of assistant treasurer.  Who is she?

“Now you might think you have the answer, but you know the qualities I have mentioned could describe so many of you, so I want to add one more thing that will really set her apart.  The AL Bear Award recipient is married to Tom and they will be celebrating their 52nd wedding anniversary this year.  AL and I would like to honor Annette Eastman.”

Caring and Commitment in Action.

One thought on “AL BEAR Award”